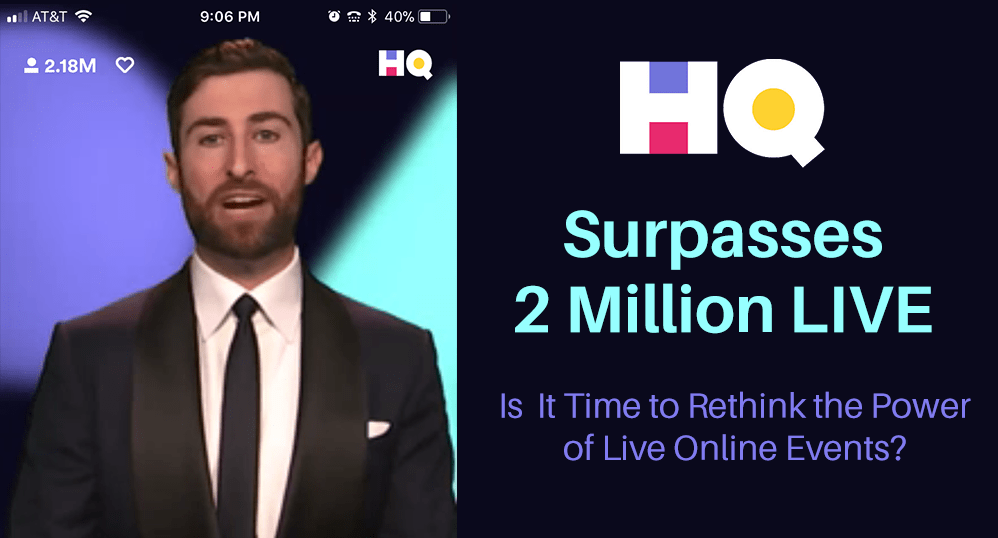 Oscar Night was a big night for Frances McDormand, Jordan Peele, and Guillermo del Toro, but perhaps one of the most noteworthy and least recognized winners of the night was HQ Trivia. At approximately 9:06 pm ET, just after Dunkirk won the golden trophy for Best Sound Editing, some 2.18 million people were drawn from whatever they were doing, or possibly watching, by the siren call of Scott Rogowsky aka Quiz Daddy, aka Edward Quizzerhands, aka Quizzie McGuire, hosting HQ Trivia, the mobile Trivia show.

2.18 million is more than the audience that typically tunes into Trump’s beloved morning program Fox and Friends (or CNN for that matter). It’s also more than the average viewership of Jimmy K’s other gig, Jimmy Kimmel Live.

From another perspective, 2.18 million live is over a hundred Madison Square Garden sellouts at once.

Indeed, the audience HQ got is more than the entire digital paid subscription of each of the nation’s major print outlets (WSJ, Washington Post, LA Times, USA Today) with the exception of the New York Times (now reportedly up to 2.6 million paid subscribers).

So, in light of HQ’s momentous success in aggregating live audience, is it finally time to retire the myth that audiences don’t respond to live online events?

For the last decade, media companies have persuaded themselves that their online audiences are simply not interested in engaging live. The perceived failure of media’s experiments with Google Hangouts circa 2013 and 2014, the flash in the pan of Meerkat and then Periscope, and the more recent disappointments around Facebook Live have all been blamed on the audience’s purported lack of interest in live events.

The success of HQ suggests that judgment may be premature. Perhaps it is the nature of the media’s live offerings and specifically their lack of audience engagement that have doomed past attempts at live online events.

HQ’s success demonstrates, more than anything, that audience participation can trump more static TV studio type production for the internet. That spontaneous off the cuff interactions with a live audience is an irresistible force, sometimes more powerful in its appeal than the $$$ sometimes thrown at “production value”

While playing HQ, one is very much aware that it is decidedly not a TV show. Passive viewers in former TVLand have now been replaced by active participants out there in iPhone/Androidland and it is the interactions of these participants who are now the focus, such as their collective successes or failures on full view as well  as the conversations among friends as they play on phones side by side with one another.)

Sure, the possibility of winning the $20 or so dollars a small elite group gets deposited nightly in their online wallet is enticing; but it is no accident that majority of the show is Scott’s banter, his mangling the names of participants as he attempts to call out an impossible number of them; his commenting on random texts, sharing birthday wishes, and poking fun of groups of participants to the delight of others. It is our involvement with Scott, our desire to be personally acknowledged and/or perchance celebrated on the closing review of winners that keeps us there until the end and coming back for more.

We certainly could not have predicted HQ’s success. Who knows whether two years ago the founders themselves imagined their ability to drag 2 million away from Hollywood’s greatest night to play trivia. But they have clearly created a new paradigm that demands recognition.

It should be abundantly clear to all in media that live online events can compete at scale with pre-recorded content of all varieties and that a secret ingredient to making this possible is audience participation.

In celebrating HQ’s hard-earned achievement, we are excited to enable other creatives to similarly pioneer new live online experiences. The Shindig large scale video chat platform offers media entrepreneurs the opportunity to engage audiences in wholly new ways, empowering the transformation of static audience/spectators into active personalities who can directly engage with hosts as well as their fellow audience members.

If you’re ready to join the live phenomenon, jump into the post-text era, and take advantage of the immense participation that large-scale online events can generate, check out Shindig’s large scale video chat technology.